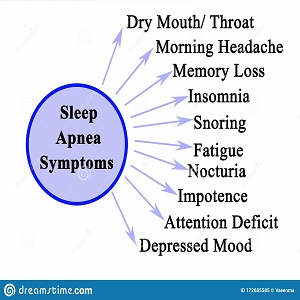 Sleep apnea, is a problem certain people have, when they sleep, they may stop breathing for short periods. These periods can last for 10 seconds or more. With approx 3-4 breaths are missed. As a result of this, those affected are often tired during the day. Mainly because such people also tend to have microsleep ( temporary episode of sleep or drowsiness which may last for a fraction of a second or up to 30 seconds where an individual fails to respond to some arbitrary sensory input and becomes unconscious) , they should not drive vehicles. Sleep apnea is a treatable disease.

Lifestyle changes are needed to normalize the breathing pattern, and they are critical first steps in treatment.

Relaxation techniques like yoganidra, any type of meditation helps in calming the mind, and also helps in reducing stress, which can further help a person to sleep better at nights.  Any chronic condition does not get cured overnight. Give sometime to yourself and get your schedule strict and disciplined, you will definitely see the progress in your health, physically and mentally.

Open chat
Hello..
Hello how can we help you?